In May 2019, there was widespread fear that violence would mar the national elections in May 2019. After a meeting with community stakeholders, including a new police anti-gang unit, the Centre trained 350 “Peace Monitors” one for each polling station in the township of Khayelitsha and adjacent Mitchells Plain area. These volunteers were drawn from the large pool of unemployed youth in the townships.

For the national election in May 2019, the Peace Centre trained 400 volunteer election monitors. Training included the meaning of democracy, our Constitution and the rights it gives. Training also included basic methods of defusing potential violence at the voting stations.

Suter & Partner (based in Switzerland) developed a web-based communication system linking each monitor to a central control able to call for assistance if danger of violence appeared to threaten the election process. The SA Police anti-gang unit was linked in. 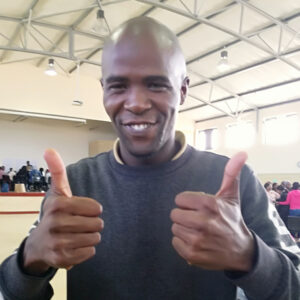 American Friends Service Committee took a very close interest in the project hoping that the lessons learned will be applicable in other African countries.

This project − planned and delivered over only 6 weeks − has made clear the numbers of people willing to volunteer for a “socially useful cause” that is well presented and managed. The project confirms the value of a sustained presence in the townships and lessons learned are being applied to many of the Peace Centre projects.

With the election behind us, we offered Alternative to Violence training to the 300 volunteer monitors so establishing an enhanced capacity for non-violence within the community.

Looking ahead, there are national local government elections in Spring 2021.  Though contested on party lines, the outcome is focussed on water, roads and similar services, that are provided by (or not provided by) these municipalities (please refer to our page on Voter Education).

The Peace Centre has applied to the Independent Electoral Commission for permission to provide election monitors who would be engaged within the actual stations.

National parliamentary elections are due in 2024 when the Peace Centre hopes to play a role in monitoring to help ensure free and fair voting.