The best way people can help themselves is by using the power of their vote.

Social problems in South Africa have deepened and only 49% of the registered voters actually voted in the last national election. There is widespread feeling that voting is ineffective. Many people are literally going to bed hungry.

Municipal elections are different. Local councils are responsible for things that directly affect the people who live in that area – water, electricity, sewage, refuse, roads, etc.  Each ward has two councillors – one is elected by proportion of party votes but the second is elected directly by voters in that ward.  These would-be councillors invariably make promises of improved council service if they are elected.  They can thus be held accountable.

The Peace Centre has found that in our townships there is, at best, very poor understanding of this and the rights and powers the Constitution gives to citizens.  We thus have three aims:-

For the Spring 2021 municipal elections, the Konrad Adenauer Foundation (KAS) has funded the Peace Centre to run a voter education project in townships in the Western Cape and Muldersdrift (an area 27 kilometres from Johannesburg). Combining materials and experience gained in the 2019 elections, teams of facilitators were recruited and trained to educate their communities on the importance of voting and to take part in the democratic process of holding their representatives to account – not just members of parliament (often rather remote figures) but also provincial representatives and municipal councillors.

The Peace Centre has built a voter training course which is being delivered to community leaders who can, in turn, take the message  back to the  wider communities.

A close associate of the Peace Centre is Paul Hoffman, a constitutional expert and head of the NPO Accountability Now. His booklet “Know Your Rights, Claim Your Rights” has been translated into Xhosa as part of this project. The Peace Centre has supported Paul in his campaigns involving legal action attacking matters of corruption and state capture.

The Peace Centre built a secondary website to support the work about Voter Rights which was developed from Paul Hoffman’s book.

The Peace Centre was also part of a group of organisations who successfully appealed to the SA Constitutional Court to outlaw corporal punishment of children. 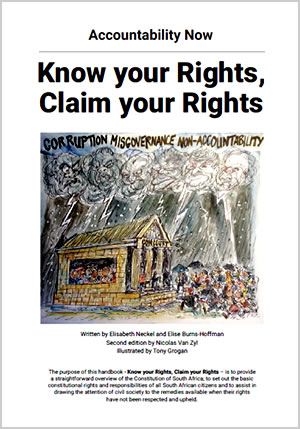